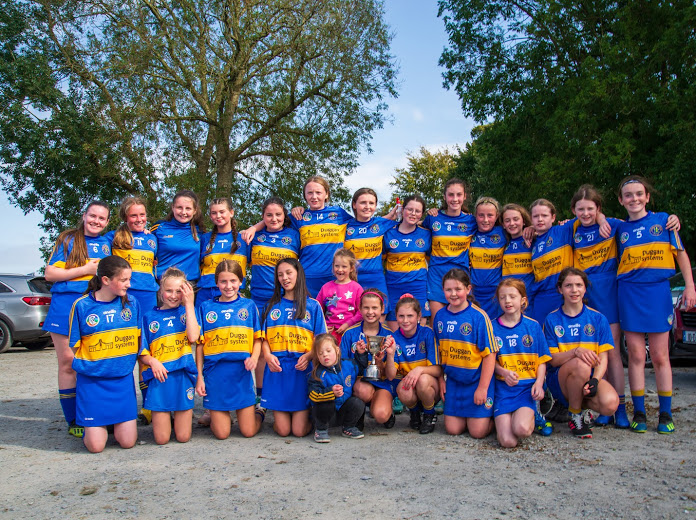 Saturday September 26 in Mungret GAA Club saw the meeting of Patrickswell and Monaleen in the Under 14 County A Camogie Championship final. Both sides were convincing winners of their respective groups to set up this mouthwatering clash. This Patrickswell team had already beaten Monaleen earlier in the year, but were taking nothing for granted in the final.

The game was refereed by Morgan O’Sullivan and started on the dot of 2pm. Monaleen had the first attack but Alannah O’Neill applied great pressure and the shot went wide. Goalkeeper Lily Griffin pucked the ball out and it was won in midfield by captain Roisin O’Brien. She sent the ball up the left side where Lily Considine earned a free which was slotted over the bar by Roisin O’Brien. Patrickswell won their puckout with some great work from Daisy O’Brien, who promptly slotted over the bar. The ‘Well were two points up.

Monaleen won the dirty ball in midfield and sent it into their corner forward, who rose to the challenge and scored our opponents’ opening point. Rachel O’Grady then started an attack from midfield, but Monaleen won the ball and the referee awarded them a free to level at 0-2 points apiece. Nicola Ryan at half-back set up Roisin O’Brien with a great pass. Roisin burst through the tackle and scored from the 45 metre line to restore the lead. From the puckout, Katelyn Cunningham claimed the sliotar and set up Shannan Kennedy to offload a great pass to Eanna Iseult. Eanna evaded two tackles and scored a fine point. The ‘Well led by 0-4 to 0-2 at the first half water break.

At the restart, Patrickswell won the possession from Monaleen’s puckout. Sophie O’Grady controlled the ball, held it and turned nicely before shooting just wide. From the resulting puckout, Patrickswell’s Sophie Carey drew the foul and Roisin O’Brien dispatched the free. The half-time score was 0-5 to 0-2.

Monaleen were playing with a strong wind in second half and the game was in the mix. Monaleen drew a free and made no mistake to reduce the arrears to 0-5 to 0-3. While Patrickwell won the puckout, the referee adjudged that the ball was thrown. Monaleen slotted over the free and moved within a single point. Lily Griffin’s fine save started an attack up the right wing. Monaleen won possession and drove the ball back into Patrickswell territory. Nicola Ryan drew a free in our half and Roisin O’Brien sent a low drive to Sophie Carey. Sophie turned the full-back and fired over the bar to make the score 0-6 to 0-4. Shannan Kennedy’s great catch in midfield picked out Sophie Carey, who beat her marker to the ball once again. Her shot sailed over the bar and established a three-point lead.

At this point, Patrickswell introduced Rebecca Corbett to the fray. Lily Griffin’s clearance was caught superbly by Roisin O’Brien on her own 45 metre line. Roisin accelerated up the left flank with her marker in hot pursuit. After navigating two tackles, she scored a magnificent point to build a healthy 0-8 to 0-4 advantage at the second half water break. Monaleen ramped up the pressure and started to dominate. However, they produce a few wides as Patrickswell’sdefence played out of their skin. Kailey O’Donnell has marked her opponent out of the match. A dangerous ball from Monaleen produced a clear goal chance, but Sarah Buston intervened with a fine challenge to save the day.

Monaleen continued to control possession and profited from some loose marking to score a point. A high ball from Monaleen was intercepted by Caoimhe Hennessy, who snuffed out the danger. She was having a solid game at corner back. From the clearance, Monaleen were awarded a free for a chop and the scoreline was reduced to 0-8 to 0-6 with just five minutes to go. Tension was high when Monaleen won a puckout, delivered a quick ball and notched a point. The Patrickswell lead was reduced to a single point and it was proving difficult to get the ball.

Monaleen surged forward and there was a question about too many steps. The referee did not call the infringement and Monaleen capitalised with an equaliser. There was two minutes left and the tide was turning. There was a pressing need to get our hands on the ball and remain calm. Monaleen won the next puckout, but Daisy O’Brien intervened and gave the sliotar to Roisin O’Brien. The ball is sent into the corner, where Rebecca Corbett didn’t let it come out easily. Eanna Isuelt hooked ferociously, while Rebecca Corbett blocked Monaleen from getting out.

Patrickswell battled for our lives and a draw was likely as time ran out. Sophie Carey was not willing to give up on the victory. From the wing, she drove a remarkable point over the bar to win at the death. The referee blew the final whistle to seal a stunning victory. The ‘Well were County A Camogie champions by 0-9 to 0-8. With six Under 12 players on the starting team, the future looks bright for Patrickswell camogie.